Tags: a new nation, a new temple, judgment of God.

Ezekiel Bible study proclaims that the morning of doom was dawning. The rod had blossomed, pride had budded from the abominations of Israel in the holy temple. Violation of the inner sanctuary would bring destruction to the city and to the land.

When Israel was in the depth of their distress, Ezekiel however received a glorious vision of the coming morning when their city would be restored. The vision of the new city was given with awe-inspiring detail and grander. The telling of the vision brought hope and assurance of the return of the glory of God to their city.

Ezekiel Bible study is about the end of an Age.

In Chapters 1-3, Ezekiel described his visions of God with its consequential charge of prophetic utterances to the people of God. In Chapters 4-24, he announced the judgments of God upon the nation of Israel, the city of Jerusalem, and the sanctuary of the temple. In Chapters 25-32, he foresaw the destruction of the neighboring nations of Israel for their rejoicing and ridicule over Israel’s fall. In Chapters 33-39, Ezekiel turned to the actually destruction of the temple, the fall of the city, and the completion of Israel’s captivity.

Ezekiel Bible study is about a new restoration.

The prophecies of Ezekiel is more than just the struggles of Israel. It is  more than being set free from their captivity and returning to their Promised Land.  It is actually the legend of every man, of every tribe of people, and of every nation.  It is the story of mankind coming back to their homeland, to their city, and to their sanctuary.  Ultimately, it is to experience the temple not made with hands, Jesus Christ.

Ezekiel Bible study is ultimately about the mystery of life. 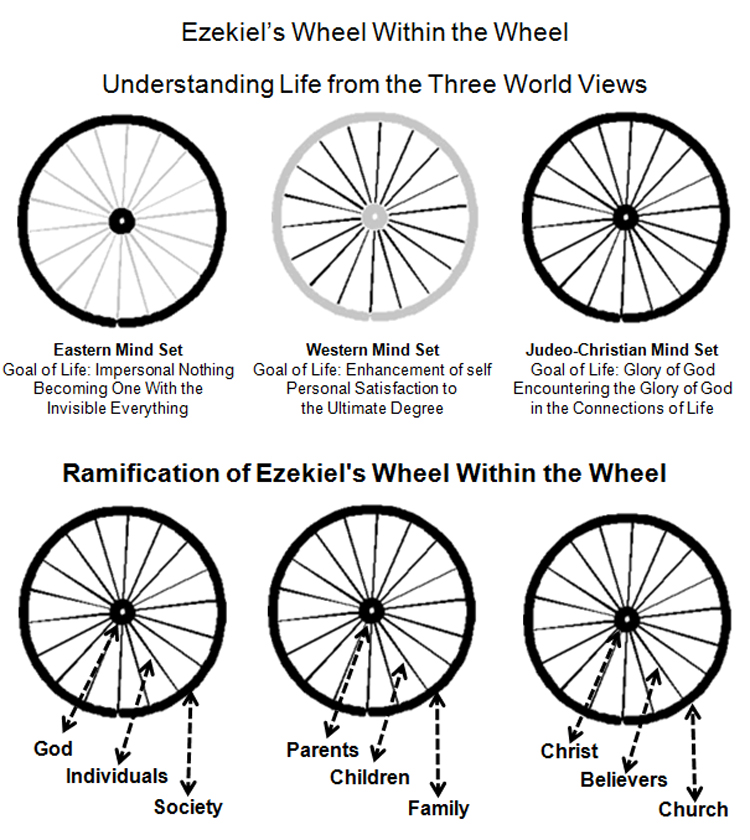 There is an underlying development of the mystery of life in Ezekiel. The physical events are not just freaks of nature. They are following the divine plan of the created world. As Jesus said,

Verily, verily, I say unto you, Except a corn of wheat fall into the ground and die, it abideth alone: but if it die, it bringeth forth much fruit” (John 12:24).

Experiencing the good life is simple. Man is to live in harmony with the ways of life (Acts 2:28).  He must know that there will always be a midnight. The human dilemma decrees that there will always  be seedtime and harvest, cold and heat, summer and winter, and day and night (Gen. 8:2).  The good life depends not on trying to keep the midnight from happening. It is about how you respond to the midnight as it occurs.  You can live through them with peace and rest. Or, you can be driven to tossing and turning in the night.  Life can either be heavenly or hellish.

The prophecies of Ezekiel reveal the secrets of the mystery of experiencing the good life.

Ezekiel Bible study reveals not only hope for Israel but hope for all men.

The sins of Israel and their refusal to return to God brought destruction to the temple, to the city and to the nation. When Israel was in the depth of their distress during the midnight of their captivity, Ezekiel received a glorious vision of the coming morning when the temple, Jerusalem, and Israel would be restored.

Amazingly, the prophecies of Ezekiel are for all man, for all tribes, and for all nations. The prophecies of Ezekiel reveal how every man can experience a new temple, a new city, and a new nation not made with hands. Ezekiel Bible study proclaims that in the midst of any midnight of captivity, God will give you the opportunity to experience the true temple (Jesus), the true city of God (the family of believers), and the true nation of God (the spiritual kingdom of God). They are the fulfillment of Ezekiel’s prophecies.

If you desire Ezekiel Bible study immediately downloaded to your computer (15 Recordings), please click on the above Immediate Download tab.

If you desire Ezekiel Bible study to be sent to your home by regular mail (15 CD’s), please click on the above Regular Mail CD’s tab.

Matthew recorded the words of Jesus when he said, “. . . I will build my church; and the gates of hell shall not prevail against it.”

What did Jesus mean by the “church” (the only gospel writer to use the term)?
What did he mean by “the gates of hell?”
Why does Matthew put a strong emphasis upon the end of the age?

Is it coincidental that Matthew’s theme is the “kingdom of God” (mentioned 51 times — twice as many as any other gospel)?

Is it accidental that Matthew’s gospel declares Jesus to be the “King of the Jews.”

Is it significant to point out that the phrase (or its equivalent) “that it might be fulfilled which was spoken by the prophet” occurs 16 times in his record)?

What is the story behind the gospel as recorded by Matthew?

Matthew ends with a similar statement as Ezekiel, “Lo, I am with you always, even unto the end of age.” — YHAH Shammah

Matthew offers the most systematic teaching of Jesus in the New Testament. Its emphasis is on the fulfillment of the Old Testament prophecy. In it the promises of God contained in the prophets are recalled and their fulfillment in Jesus Christ is announced.

The structure of the gospel contains five major sections. Did the author intend to give the Jewish readers a new Torah, the five books of the law?

Each of the sections, in turn, consists of three items:

Matthew is full of clues that it was written to convince Jewish readers that Jesus was the “Messiah.”

Makes no attempt to translate or explain Jewish words and practices.
Quotes more frequently from the Old Testament than any other gospel.

Jesus is portrayed as a descended of the three great figures of the Old Testament but as surpassing them.

Outline of Matthew Indicates the Fulfillment of the Prophecies of Ezekiel
(Five Major Sections of Matthew, again, is the author of Matthew connecting his writings to the five books of the Torah?)

(Introduction: The Story of the Birth of Jesus — Chapters 1-2)

Chapters 3-4 Temptation and beginning
Chapters 5-7 Sermon on the Mount (Jesus contrasted the laws given by Moses with the principles of Kingdom of God — two recurring phrases, “You have heard that it was said of old . . . but I say to you.”

Chapters 14-17 Miracles, debates, and conflicts
Chapter 18 Words of counsel by Jesus to his disciples about the Christian life

Table of Contents for Ezekiel

Ezekiel: Session 2 – (Judeo-Christian Mind-Set)
The Wheel Within the Wheel

Ezekiel: Session 9 – (The Book of Job)
The Nature of Evil

Ezekiel: Session 13 – (Chapters 44-47)
The Purpose of the Millennial Temple

If you desire the Ezekiel Bible study immediately downloaded to your computer (15 Recordings), click on the above “Choose an option” and choose “Instant Download.” Then, click “Add to Cart.”

If you desire the Ezekiel Bible study sent to your home by regular mail (15 CD’s), click on the above “Choose an option” and choose “Regular Mail CD’s.” Then, click “Add to Cart”