Spirit of Man: Adversary to the Ways of God in the Life of Man

Spirit of Man: Adversary to the Ways of God in the Life of Man

The spirit of man, evolving from his own obserations in the exercise of his mind, gives birth to the adversary of God in his life. 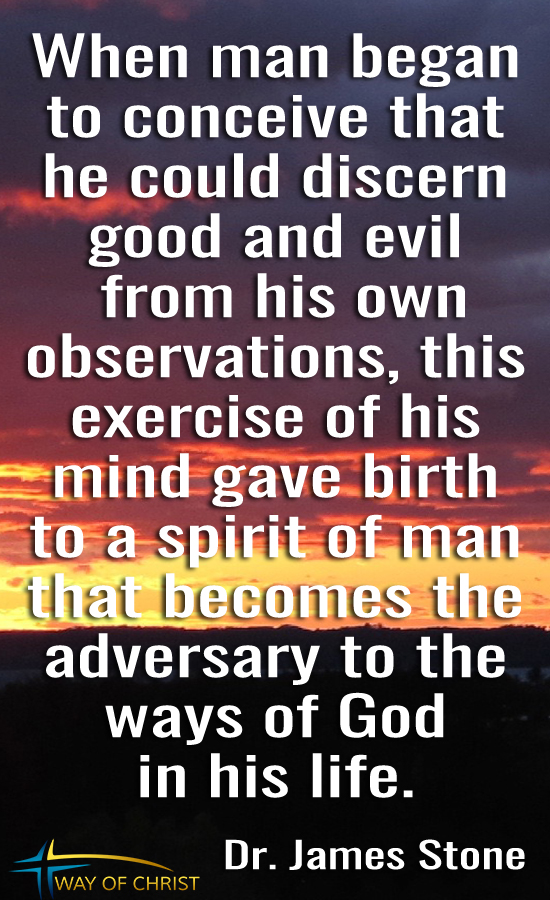 In the mystery of the book of Genesis, the author recorded,

And the Lord God formed man of the dusk of the ground, and breathed into his nostrils the breath of life, and man became a living soul.

With the Lord God forming man of the dusk of the ground, he would begin his existence with a physical, materialistic body. Man, however, would be more than just a physical being. As one of the early followers of Jesus stated,

God would breathe into the physical body the breath of life and man would become a breathing creature, a living soul. He had a physical, natural body which was animated by the Spirit of God that dwells within him.

At this point in the existence of the first man, he would experience his life on a very high plane of spirituality. He would be controlled by the Spirit of God. Having his life dominated by the spiritual presence of the breath of God, he would live his life as a true spiritual being although clothed with a physical body.

The spirit of man originates in what has been commonly called the fall of man.

Sometime after that original creation, however, man experienced what is commonly called the fall of man. This fall from the high plane of spirituality to the lowly existence of being dominated by fleshly concerns occurred as the first pair began to conceive their individuality as an unique self. As the writer of Genesis recorded, when they ate of the fruit of the tree of the knowledge of good and evil their eyes were opened. Consequently, they experienced the first death that all men experience. They died to the glorious quality of life that is found only in being controlled by the Spirit of God.

Mysteriously, once eating of this fruit they became blind to the spiritual things of God. They were no longer spiritual people motivated by the Spirit of God. They became fleshly people provoked by the sensual instincts of their mind. Their intellect and emotions would no longer exist in, by, and through the Spirit of God. They began to conceive that they could observe what was happening in the created world. Then,  based upon that observation they would pass judgment on what they thought would be good or evil for themselves. Since that perceived knowledge came from within their own thinking, the exercise of their mind based upon their observations gave birth to a spirit of man within man.

The spirit of man is always the adversary to the ways of God in man’s life.

The author of Genesis not only revealed that the physical, the natural, came first and then the spiritual but he also revealed that there is nothing that pertain to the physical realm that equates to anything within the spiritual realm. Likewise, there is nothing in the spiritual realm that can equate to the physical realm (Gen. 3:1-24). As illustrated in Genesis Chapters 2 and 3, man, mysteriously, found his existence in the antithesis of his physical and his spiritual natures. Because of his unique creation, a physical body with a brain that is capable to think about its thinking animated by the Spirit of God, man would spend the days of his life mysteriously caught in the struggle between his physical and his spiritual existence. The spirit of man can never relate to the Spirit of God.

The spirit of man is only conquered by the only man that ever lived in the perfect manifestaion of the physical and the spiritual.

For man to be able to understand the perfect cohesion of the physical and the spiritual, it would take the disclosure of the only man ever to achieve the perfect manifestation of the physical and the spiritual, Jesus of Nazareth. The true answers to the struggle of the two natures of man can only be found in the death and resurrection of Jesus Christ. It will take the coming of Christ into our lives, through the power of the Holy Spirit, to overcome the natural, sensual tendency of the spirit of man to enable him to become once again a true spiritual being. The risen Christ is the only key that unlocks the mysteries of life.

Tags:fall of man, spirit of man