Preeminence of Christ: As Opposed to the Disgrace of Man

Preeminence of Christ: As Opposed to the Disgrace of Man

The Preeminence of Christ is the will of God the Father for mankind. 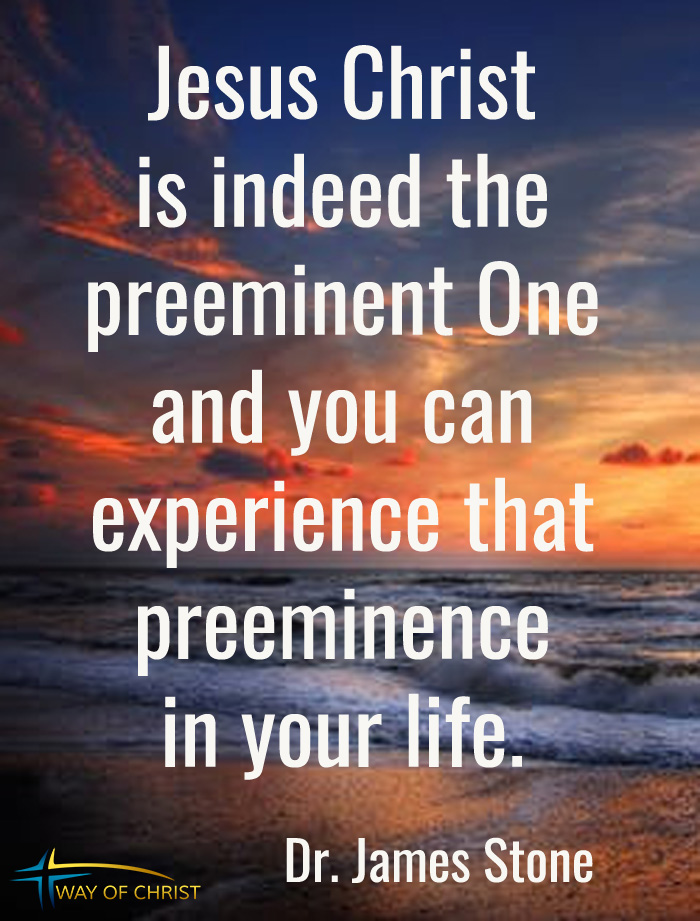 The dumping down of the preeminence of Christ occurs far too often in mankind even though the human being is the crowning moment of creation. One of the early followers of Jesus wrote that Jesus Christ “is the image of the invisible God, the firstborn of every creature: For by him were all things created, that are in heaven, and that are in earth.“ He added, “all things were created by him, and for him . . . and by him all things consist.“ The writer gave the conclusion that Jesus Christ “is the beginning, the firstborn from the dead; that in all things he might have the preeminence . . . for it please the Father that in him should all fulness dwell“ (Col. 1:15-17).

Another of the New Testament writers penned, “These things saith the Amen, the faithful and true witness, the beginning of the creation of God“ (Rev. 3:14). Jesus Christ was and is the beginning of all creation. He was and is also trustworthy in all that would transpire within that creation. He was and is “the Amen,“ the so be it, of all that starts with him, continues with him, and finishes with him. Jesus Christ is indeed the preeminent One.

The Preeminence of Christ Is Opposed by the Disgrace of Man.

Standing over and against the preeminence of Christ is the shame, the disgrace, of man. John of Revelation recorded the message of the risen Christ to the church of the Laodiceans:

Because thou sayest, I am rich, and increased with goods, and have need of nothing; and knowest not that thou art wretched, and miserable, and poor, and blind, and naked: I counsel thee to buy of me gold tried in the fire, that thou mayest be rich; and white raiment, that thou mayest be clothed, and that the shame of thy nakedness do not appear (Rev. 3:17-18).

The preeminence of Christ, the shame of man, and the consequential conflict is the struggle that occurs within every man. This great conflict occurs because the shame of man is the disgrace found in man (“disgrace“ is the meaning of the original word that is translated shame in “the shame of thy nakedness”). Instead of living in the free-flow of the grace of God, experiencing the preeminence of Christ in his life, man with an overactive imagination will “frustrate [disgrace] grace“ (Gal. 2:20-21). As the great grace preacher of the New Testament proclaimed,

I am crucified with Christ: nevertheless I live; yet not I, but Christ liveth in me: and the life which I now live in the flesh I live by the faith of the Son of God, who loved me, and gave himself for me. I do not frustrate the grace of God: for if righteousness come by the law [my effort], then Christ is dead in vain (Gal. 2:20-21).

The Preeminence of Christ Is Always Experienced through the Grace of God.

Paul also stated, “But by the grace of God I am what I am: and his grace which was bestowed upon me was not in vain; but I laboured more abundantly than they all [all the other apostles]: yet not I, but the grace of God which was with me“ (1 Cor. 15:10). Labor, toil in the life of Paul, was being accomplished but he was quick to point out that it was not his labor but the work of grace that was with him. As he stated to the Colossian saints, “Whereunto I also labour, striving according to his working, which worketh in me mightily“ (Col. 1:29). Again, labor is occurring, but it is the work of the Holy Spirit in and through Paul not Paul working in and trough his flesh for Christ.

In a vision, John was told to record the words of the risen Christ and to send them to the church of the Laodiceans:

The Laodiceans had lost their enthusiasm (original meaning for lukewarm) for the preeminence of Christ. They, evidently, had fallen prey to the same error in which the Galatians were struggling:

O foolish Galatians, who hath bewitched you [“to malign, that is, (by extension) to fascinate (by false representations“)], that ye should not obey the truth, before whose eyes Jesus Christ hath been evidently set forth, crucified among you? This only would I learn of you, Received ye the Spirit by the works of the law, or by the hearing of faith? Are ye so foolish? having begun in the Spirit, are ye now made perfect by the flesh (Gal. 3:1-3).

The Preeminence of Christ is Lost in the Mind of Man through His Vain Imaginations .

The Laodiceans evidently had shifted their eyes off of the preeminence of Christ and on to the shame of man. They had become so bewitched that they said “I am rich, and increased with goods, and have need of nothing and [knew not that they were] wretched, and miserable, and poor, and blind, and naked“ (Rev. 3:17). The solution for the Laodiceans was not complicated. They just needed to have their eyes turned back to Jesus.

The risen Christ declared to the Laodiceans, “thou art wretched, and miserable, and poor, and blind, and naked.“ Then, he admonished, “I counsel thee to buy of me gold tried in the fire, that thou mayest be rich; and white raiment, that thou mayest be clothed, and that the shame of thy nakedness do not appear.“ Finally, the risen Christ proclaimed to the Laodiceans, summarizing the entire conflict between the preeminence of Christ and the shame of man, “as many as I love, I rebuke and chasten: be zealous therefore, and repent“ (Rev. 3:17-19).

From the deception that begins in infancy to the revelation of maturity that occurs with age, the love of God so works in the shamed of man to bring his soul to not only experience the life of God, but to know, to appreciate, and to delight in the experiencing of that life and love of God. Jesus Christ is indeed the preeminent One and you can experience that preeminence in your life. Let your eyes be turned to Jesus.

Tags:disgrace of man, grace of God, preeminence of Christ