Babylon that great city, as recorded by John, “is fallen, is fallen, and is become the habitation of devils, and the hold of every foul spirit, and a cage of every unclean and hateful bird.” 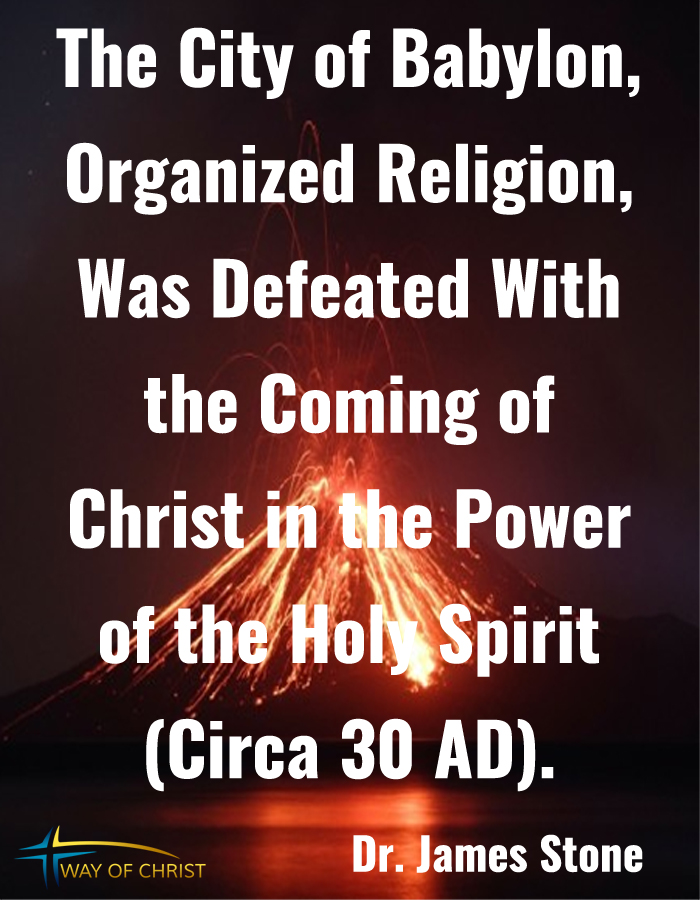 There are many in the modern church who fail to understand fully the significant events that transpired during the generation between the resurrection of Christ and the death of Judaism. The destruction of the Jewish Temple with its sacrificial offerings ended a way of life, never to be revived, that had existed for nearly two thousand years. The coming of the risen Christ with great power and glory in the descent of the Holy Spirit fifty day after his resurrection began a new movement, a new nation, the spiritual kingdom of God on earth, that would never come to an end. Is it any wonder that the marking of time for all ages, in the calendar used by most of the world, would center around the events of that generation?

Babylon defeated by the death, resurrection, ascension, and return of the risen Christ in the power of the Holy Spirit is the distinguishing mark of history.

Although the dating system of “Before Christ” and “After Death” was actually not generally used until several centuries after the resurrection of Christ, it has become the standard of yearly  measurement in most of the world (Gregorian calendar). With A.D. actually standing for the Latin anno domini (“in the year of our Lord”), the emphasis is that the turning point of world history is the life, death, resurrection, and return of Jesus Christ. To those who prefer to use the more modern destinations of “Before the Common Era (BCE) and the “Common Era” (CE) so as not to offend non-Christians cultures, ironically for them, the distinguishing event that separates BCE and CE is still Jesus Christ.

For example, the history of Judaism would be known as the time before the coming of Christ (B.C.). The ” Son of man coming in the clouds of heaven with power and great glory” (Matt. 24:30) to establish the kingdom of God on earth would come to be known in time as “in the year of our Lord” (A.D.). Again, few fully realize the significant of those events that transpired to bring about this shift of time in the history of mankind.

Babylon, the great city, reigns over man through both civil authority and religious influence.

In the days of that generation, those who lived in the time of the writing of Revelation (again, circa 69 AD) were confronted both from political authority and from religious influence. The letter sent to the seven churches by John indicated both of these adversaries. First, the threat of civic power was prevalent: “I know . . . where thou dwellest, even where Satan’s seat is . . . and hast not denied my faith, even in those days wherein Antipas was my faithful martyr . . . where Satan dwelleth” (Rev. 2:13). In Pergamos, one of the prevalent adversary or opponent to the believer’s way of life was the civil authority of the Roman Empire.

The followers of Jesus Christ encountered the resistance of civil authority especially in the provinces where a Roman garrison was established. Judaea with its capital Jerusalem, the stronghold of early Christianity as well as Judaism, would particularly feel the sting of Roman occupancy. In Revelation, John wrote of the imperial power of Rome making “war with the Lamb . . . and they that are with him . . . .” (Rev. 17:14).

Babylon would ultimately be a deterrent to the faith of believers by its threat of organized religion.

Although the imperial power of Rome’s government was devastating at times, it would pale in comparison to the threat and the challenges of “organized” religion. The early believers would actually face a three prong attack on the simplicity and purity of their faith in Jesus Christ. The religiosity of Rome, the religious convictions of Judaism, and the forces of religious legalism from within their own ranks would aggressively assault the believer’s personal relationship with Jesus Christ. The believers in Jesus Christ were constantly threatened by Rome, by Judaism, and by misguided Christians to tempt them to prostitute their personal relationship with God. Although the menace of the civil authority of Rome was always present, it would be the threat of organized religion that was the greatest deterrent to the faith of believers.

For example, in the church of Philadelphia, this religious contention was constantly present: “These things saith he that is holy, he that is true, he that hath the key of David, he that openeth, and no man shutteth; and shutteth, and no man openeth.” To which, the angel of the church added, “Behold, I will make them of the synagogue of Satan, which say they are Jews, and are not, but do lie; behold, I will make them to come and worship before thy feet, and to know that I have loved thee” (Rev. 3:7-9). A simple reading of the letters of Paul would also indicate the struggle of breaking completely free from the tentacles of religious Judaism.

The believers in Jesus Christ not only had to contend with the religion of the Jewish practitioners but also had to strive with those who were religious within their own ranks: “I know . . . how thou canst not bear them which are evil: and thou hast tried them which say they are apostles, and are not, and hast found them liars” (Rev. 2:2). Also, to the church in Thyatira, “. . . I have a few things against thee, because thou sufferest that woman Jezebel, which calleth herself a prophetess, to teach and to seduce my servants to commit fornication, and to eat things sacrificed unto idols” (Rev. 2:20). Finally, the entire essence of the angel’s message to the Laodiceans (3:14-22) clearly indicated how the “works of the law” can make the believer “wretched, and miserable, and poor, and blind, and naked” (Rev. 3:17). The church of the Laodiceans, because of their many practices of religion, thought they were “rich, and increased with goods, and [had] need of nothing” were told by the risen Christ, however, “because thou art lukewarm, and neither cold nor hot, I will spue thee out of my mouth.”

Babylon, the great city, looks so good on the outside and yet is full of deadly poison on the inside.

Organized religion, looking so good to the natural eye, is so deceptive that it eventually “kills” the souls of men. With each elaborate and often colorful religious practice of the visual church, the souls of men become a little more deaden to the quickening of the life-giving Spirit of God. The practice of religion is far more dangerous to the souls of men than any civil authority, good or bad, can be.

The danger of organized religion is so deadly that Jesus, the man of love and compassion (1 John 4:16), spoke with intense abhorrence against those whose lives were determined by rules and laws: “Woe unto you, scribes and Pharisees, hypocrites! for ye are like unto whited sepulchres, which indeed appear beautiful outward, but are within full of dead men’s bones, and of all uncleanness” (Matt. 23:27). He quickly added, “Even so ye also outwardly appear righteous unto men, but within ye are full of hypocrisy and iniquity” (Matt. 23:28). He would also state, “woe unto you, scribes and Pharisees, hypocrites! for ye shut up the kingdom of heaven against men: for ye neither go in yourselves, neither suffer ye them that are entering to go in” (Matt. 23:13). With eight “woe unto you, scribes and Pharisees” statements in his message of the breakdown of their way of life (Matt. 23:38), he identified the perils and the tragedy of a religious-driven life.

Babylon, in the book of Revelation, is the symbolic name given to organized religion.

The book of Revelation, also, emphasized the danger of attempting to live by rules and visible rituals by symbolically representing organized religion as “that great city Babylon” (Rev. 18:10). Again, the first readers of John’s letter would immediately recognize that ancient Babylon had destroyed their city, their temple, and carried off their fathers into captivity. The danger of what Babylon represented in their day could also carry them into bondage. The prostitution of their relationship with God through the seduction of religion could also cause them to drink “the wine of the wrath of her fornication” (Rev. 18:3).

The story of the outward beauty and the inter ugliness of organized religion is exposed in Revelation, Chapter 18. Fortunately, its destruction is also revealed:

For true and righteous are his judgments: for he hath judged the great whore, which did corrupt the earth with her fornication, and hath avenged the blood of his servants at her hand” (Rev. 19:1-2).

Babylon, organized religion, is defeated in man when his life is controlled by the Holy Spirit.

Living in the Spirit of the heavenly realm, there could be victory because the dragon (the flesh) would not be found any more in the dwelling of the heavenly (Rev. 12:7). John simply recorded, “And the great dragon was cast out, that old serpent, called the Devil, and Satan, which deceiveth the whole world: he was cast out into the earth, and his angels were cast out with him” (Rev. 12:9). Then, he added, “. . . Now is come salvation, and strength, and the kingdom of our God, and the power of his Christ: for the accuser of our brethren is cast down, which accused them before our God day and night” (Rev. 12:9-10).

Truly, the events that transpired in that generation between the resurrection of Christ and the death of Judaism did change the course of human history. For the first time ever in the history of man, the descent of the Holy Spirit to become the quickening essence of life for man could and would defeat religion’s hold on man. The cry could go forth and did go forth, “Babylon the great is fallen” (Rev. 18:2). Fifty days after his resurrection and ascension on the Jewish day of Pentecost, the return of the risen Christ to dwell within man in the power of the Holy Spirit caused all within the ranks of organized religion to “cast dust on their heads, and cried, weeping and wailing, saying, Alas, alas, that great city . . . is . . . made desolate” (Rev. 18:19). Babylon has fallen!