Tags: hell of the mind, picture of hell, where is hell.

The road to the portrait of hell in one’s life begins with such innocent steps that the individual “knoweth not that it is for his life” (Prov. 7:23).  A simple young man just went down the wrong road, but the experiences of the road kept getting progressively more destructive.  The writer of Proverbs continued the story:

Passing through the street near her corner; and he went the way to her house, In the twilight, in the evening, in the black and dark night: And, behold, there met him a woman with the attire of an harlot, and subtil of heart. (She is loud and stubborn; her feet abide not in her house: Now is she without, now in the streets, and lieth in wait at every corner  (Prov. 7:7-11).

Little did the young man know what was waiting for him at every corner of the street.

Portrait of hell always begins with a first step.

Heaven and hell, life and death, and Spirit and flesh are all contained in Paul’s statement to the Romans: “For to be carnally minded [literal meaning, inclination] is death; but to be spiritually minded [inclination] is life and peace” (Rom. 8:6).  When the mind is inclined toward God through the Spirit, there is the heavenly life.   However, when the mind is inclined toward the flesh, through the perception of man’s own thinking, there will always be the tortured soul of hell. There will always be a portrait of hell.

Portrait of hell is always the result of man’s mind gone wrong.

. . . For judgment I am come into this world, that they which see not might see; and that they which see might be made blind.  And some of the Pharisees which were with him heard these words, and said unto him, Are we blind also?  Jesus said unto them, If ye were blind, ye should have no sin: but now ye say, We see; therefore your sin remaineth (emphasis mine)  (John 9:39-41).

Portrait of hell will always be painted by the brush strokes of man’s mind.

When the hissing whisperer of the perception of man’s moves him out of the heavenly realm, he will then have to experience life only in the perception of his earthly thinking.  The exercise of the mind will always be the designated place of hell.  The anguish and torture of hell is the curse that comes to every mind when the mind itself begins to perceive that it can see (John 9:41).  Again, it matters not where the space or the time of hell may be, the tortures of hell will be experienced always in the mind of man.  The portrait of hell is always painted by the brush strokes of the mind. 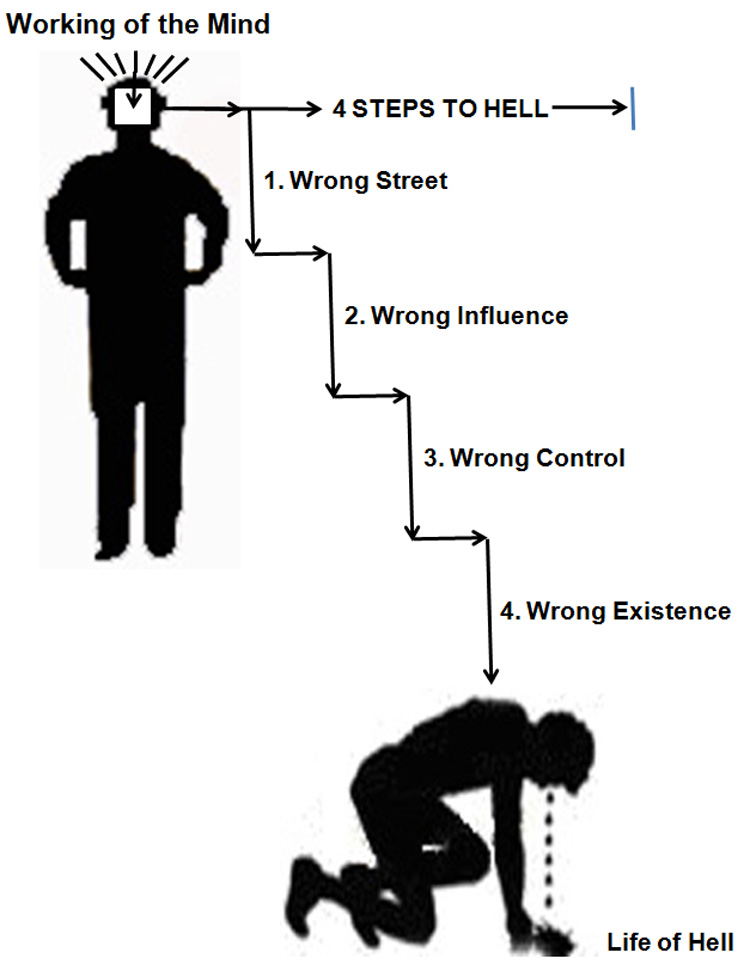 If you desire Portrait of Hell immediately downloaded to your computer, please check the above purchase tab.

The first step of death down the wrong road always begins in the vanity of man’s imagination. In Paul”s letter to the Corinthians, the first step to destruction is again revealed by telling the story of Israel in the wilderness. He wrote,

“Moreover, brethren, I would not that ye should be ignorant, how that all our fathers were under the cloud, and all passed through the sea; And were all baptized unto Moses in the cloud and in the sea; And did all eat the same spiritual meat; And did all drink the same spiritual drink: for they drank of that spiritual Rock that followed them: and that Rock was Christ. But with many of them God was not well-pleased: for they were overthrown in the wilderness. Now these things were our examples, to the intent we should not lust after evil things as they also lusted” (1 Cor. 10:1-6).

Paul desired that the Corinthians (all believers) would not ignore (“be ignorant”) the examples of the downward road that had occurred in the life of Israel in the wilderness.

The travelers of that road died in the wilderness when they took their first step out of the lust (“to set the heart upon”) of evil (“worthless”) things (1 Cor. 10:6). They set their heart upon things that were worthless in the experiencing of life. It began with a “murmur[ing]” and ended in being “destroyed of the destroyer [a ruiner, i.e. (specifically) a venomous snake”])” (1 Cor. 10:10).

Not experiencing the Life of Christ (1 Cor. 10:4), they were easily deceived by the circumstances they were facing. They began to grumble (“murmur”) against Moses and God:

Failing to understand where life is, they fell to the deception of earthly things. They took their first step down the road to hell from the illusion of their perception that life was in the “inheritance of fields and vineyards.” They, too, had entered into the street “and knoweth not that it [was] for [their lives]” (Prov. 7:23).

James described this same beginning of the road to death in a very precise manner. He wrote, “Let no man say when he is tempted, I am tempted of God: for God cannot be tempted with evil, neither tempteth he any man: but every man is tempted, when he is drawn away of his own lust . . .” (James 1:14). What causes man to be drawn away (“to drag forth, i.e. to entice”) from the life of God is a longing which comes forth out of setting the heart (lust) upon evil (worthless) things. The first step of death is always a step towards what man ignorantly thinks will give him life, but it is, in fact, worthless in the production of life. It is evil.

Finally, in his letter to the Ephesians, Paul described the first step to death and specifically named it. First, he described it as the “ignorance that is in [men]” (Eph. 4:18). Man always takes this first step of the downward road because he does not know (he is not experiencing) the life of God. Being deceived, he easily becomes prey to the illusion of his mind. In ignorance, he falls for the enticement of the first step of the road.

Paul called this first step “principality” (Eph. 1:21). Principality is translated from a word meaning, “a commencement, or (concretely) chief (in various applications of order, time, place, or rank).” It, in turn, comes from a word meaning “to commence (in order of time).”

The first step is the commencement, “to turn aside (especially for lodging)” to a different way (road) to life. It is the turning of the young man to the “strange woman”(Prov. 7:1-27). This new found road then becomes the chief principle (“principality”) of life for the traveler of the new road. Jesus Christ is no longer the Way to life, a new way has commenced.

This booklet (6 pages) will cover such topics as:

Principality, Power, Might, and Dominion
The Tortured Soul of the Deficient Life
The Dimming Light of the Downward Road
The Designated Place of Torture

If you desire Portrait of Hell: What the Bible Says About Hell immediately downloaded to your computer (6 pages), click on the above “Choose an option” and choose “Instant Download Written Book.” Then, click “Add to Cart.”

If you desire Portrait of Hell: What the Bible Says About Hell to be sent to your home by regular mail (6 pages), click on the above “Choose an option” and choose “Regular Mail Written Book.” Then, click “Add to Cart.”